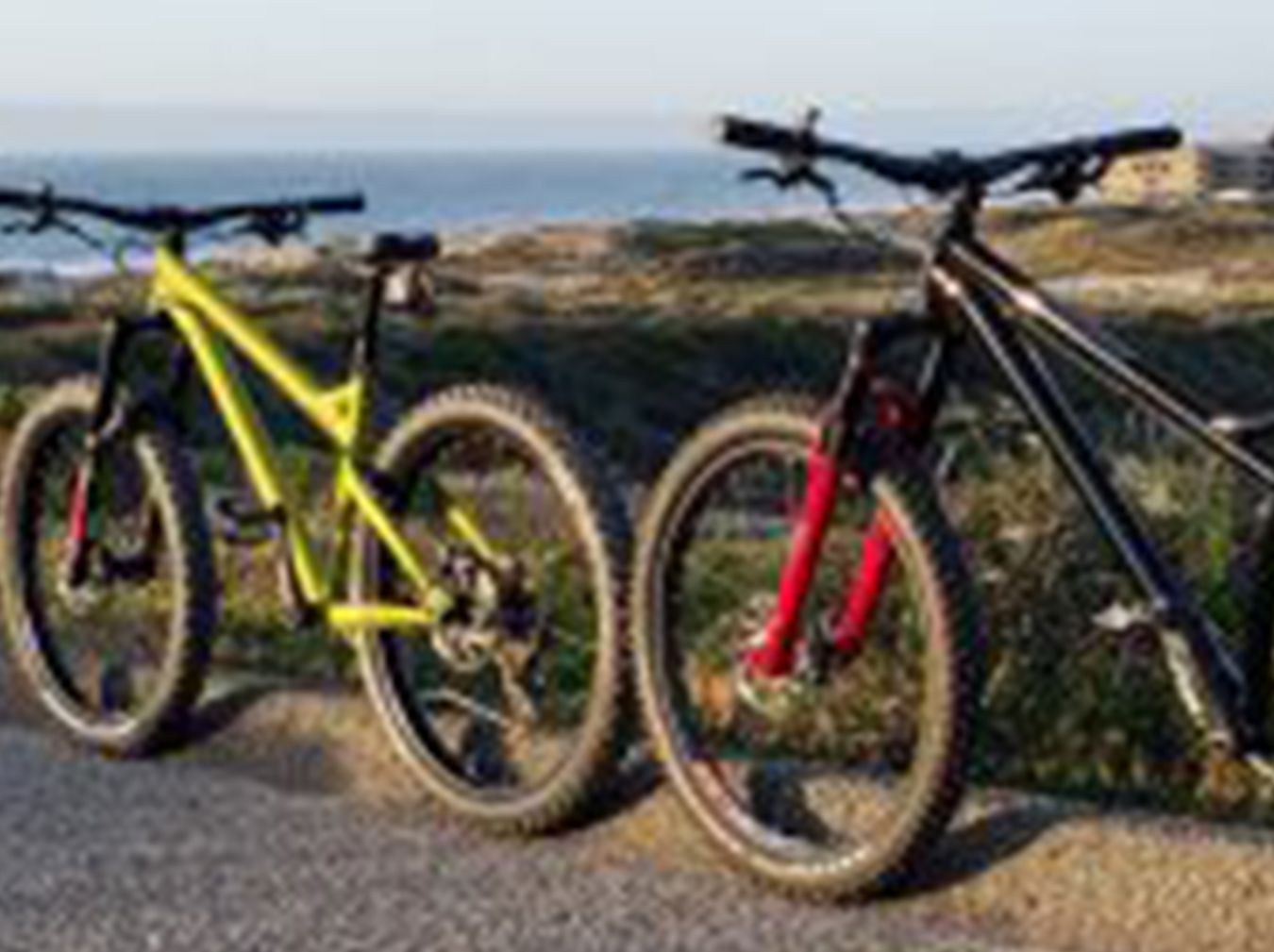 Hardtail vs. Full Suspension – Battle for the Soul of Mountain Biking

When hardtails were just “mountain bikes”

For many years, before proven suspension designs went mainstream, the only mountain bikes were hardtails. And we loved them, warts and all.

Author’s notes: my first mountain bike was a fully-rigid steel Ritchey that I got from a guy who sold weed and settled a debt with someone for the bike. That bike was so much fun – we rode with no helmets and were hooked from the start. There were no social cliques in the sport then, we were all just “mountain bikers”.

What you could call an “aggressive hardtail” was usually a bike with steep angles that were optimized for XC racing, and the best hardtails were seen as the ones most oriented to that discipline. 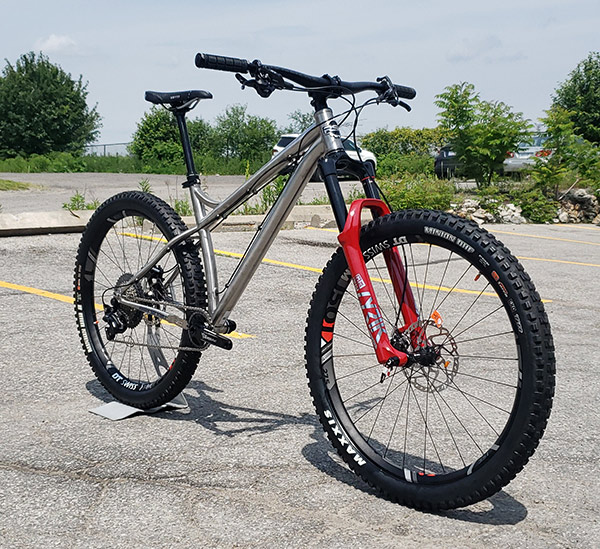 I don’t remember now what happened to the Ritchey, but my two friends who rode with me both got new aluminum hardtails, and one even had a bad suspension fork. I scoped my LBS for months while I saved up and finally bought my first new rig – a 7005 series aluminum Mongoose IBOC Comp with oversized downtube and rigid fork. That bike was a featherweight 25 pounds or so, with a long stretched-out top tube that leaned me into an aero-XC stance and made me feel rad like Ned Overend or Johnny T.

As the sport grew and developed an identity apart from the XC race scene, together with the influence of downhill racing, a hardcore element developed which begat the freeride scene.

My next bike (post-theft of the IBOC) was another spanking new aluminum XC rig – a raw-finish KHS Alite 3000 with XT parts (!) and an aftermarket RockShox Judy XC fork. The Judy is renowned for bringing long travel to the masses – all 2.5″ of it. Now it was time to start sending huge rock drops of 4-12 inches. We jibbed all over our local loops looking for any chance to squeeze that fork down to the crown. And by this point, spandex shorts were traded in for baggies.

For hard-core old-school types, steel never went out of style, but aluminum was still king for the rest of us. To this day the combination of lightweight, stiffness and affordability makes aluminum alloy frames popular, and very common.

Late 90’s update: my desire to huck everything in sight and take advantage of the shiny new tech inspires me to fork over the big dough for a thermoplastic full-sus GT STS 1000. Pivots came loose and bolts fell out regularly, so the hardtail was reduced to the backup plan for when the new bike was in the shop (a lot).

So we began to send burlier bikes down gnarlier trail and eventually designed capable bikes that we could climb higher and further out, and still descend with wild abandon. Carbon fibre took hold of our collective fascination (and savings accounts), suspension designs got much better, and it seemed for a while that we’d reached the pinnacle of mountain bike development. 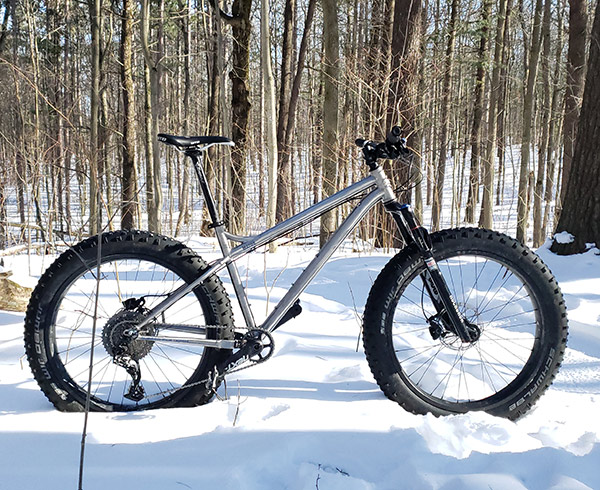 My bomb-proof aluminum Santa Cruz Bullit gave way to a series of full-suspension carbon wonder bikes that cost more than my first few cars (put together), and they worked so well that I often wondered if I hadn’t sold my mountain biker’s soul for a little extra squish and easy traction. Every chip in those carbon frames gave me more grey hairs, and a fatal crack that killed one of the frames made me come to terms with the real price for all that fun – financially and emotionally- that I had to pay for how far we’d come. I was still doing the same great sport I loved, but the stakes seemed so much higher.

Well, it turns out that we’ve come full circle in the last decade or so when hardcore long-travel hardtails emerged as an alternative to the alloy, and then carbon, full-suspension trail bikes that came to dominate the market. From there the bikes were refined and developed for all-mountain riding (remember that one?), until eventually, you arrive at today’s ultra-capable and reliable hardtail frames that compete on strength and weight with their more complex and pricier full-suspension cousins, and that can be ridden absolutely everywhere, too.

One particularly lengthy warranty claim of my daily-driver carbon trail bike a few years back provided the opportunity I’d been waiting for – parts swap onto a new-school steel hardtail that could take whatever the west coast gnar of BC could dish out for a whole season. And the price for all that fun was just a few extra minutes a day of stretching out limbs that were more actively engaged in absorbing trail than they’d been used to for a while. And what fun it was.

Hardtails are good for the soul of mountain biking

There is undeniably a purist element that favours a hardtail over a more forgiving full-suspension bike, but the simplicity and fun that the original hardtails promised has been manifested in the form of the modern, aggressive hardtail mountain bike. The best of these are finely crafted steeds, often made from the highest-quality steel and titanium tubing.

They don’t build ’em like they used to – and in this case, that’s a very good thing. If we’d had these bikes back in the day – oh boy. Of course, back then I could never afford the baller titanium MiddleChild, for instance, but I love these new hardtails so much because everything I learned to do on a bike, I learned on my old hardtails first.